Success Secrets from the All Blacks - FP Advance

Success Secrets from the All Blacks Is your life defined by a goal bigger than money? There’s nothing wrong with money. We need it to turn ideas into action. However, if money is your only goal you’ll never be satisfied. There’s always a bigger number or an extra zero to be added.

Whenever I do some business planning work with a client, I’m always interested to see if we can find a goal that’s bigger than money.

Because a goal that has a deeper appeal might just keep you going through thick and thin. That’s what you’ll need if you want to achieve something amazing in your life and your business.

Dig deep for the treasure

If this all sounds a bit pie in the sky or grandiose, then I want to challenge that.

Everyone has a goal that’s bigger than money when they dig a little. Everyone.

A client I was working with recently felt that he had no bigger pull than money. His business was just a means to an end; a money maker for his family. This is the same guy that has told me several times in our work together that he doesn’t just want to be ordinary as an adviser. So I didn’t believe him when he spun me the ‘means to an end’ line.

When we dug a bit further it was clear that providing a quality education for his children, spending time with his family (more than anything else), and some travel abroad were the real drivers.

These are goals bigger than money, are they not?

You might have even bigger goals: to change the world, or dramatically impact your local community or region. Great. But anything that drives you will do.

Understanding your own drives is important. What you’ll find as you start searching for the real meaning in your work, i.e. your goal bigger than money, is that it can grow from humble beginnings into something different and more powerful over the years. It needs to be nurtured and developed.

I’ll be barred for life from Australia over this, but let’s look at a perfect example.

If you want to understand a goal bigger than money, then take a look at the best sporting team on the planet. 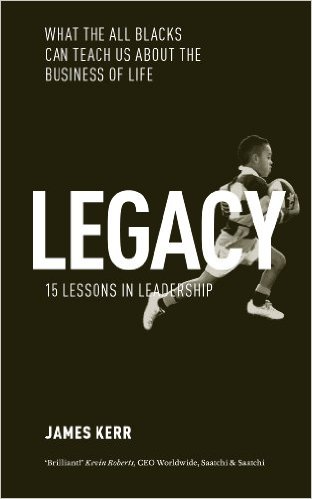 The New Zealand All Blacks rugby team are probably the most successful sporting team in the world, in any sport. They have a 77% winning record in test match rugby (over 114 years), and are the only international side with a winning record against every opponent. Since their international debut, in 1903, they have only lost to six of the 19 nations they have played in test matches.

Since the introduction of the World Rugby Rankings in 2003, New Zealand has held the number one ranking longer than all other teams combined.

In his book, Legacy, James Kerr explains the amazing culture in All Blacks rugby. Steve Gazzard, former CEO of the IFP and now a Director at SJ Gazzard Consulting, recommended this one to me. It’s an amazing read.

At the core of that culture is a belief that All Black players are merely custodians of the jersey. They own it for a while and pass it on to the next generation. Their goal is to ‘leave the jersey in a better place’.

As I wrote about in my article One Voice CAN Make A Difference, the goal for many business owners is to make a difference. They want to bring something good to their clients, their community and the world, even if it is a relatively small number of people.

Many of the best leaders in the business world share that same philosophy. They might be the CEO at xyz public company that’s been trading for 200 years, but they realise their job is to leave the business in a better place than they found it.

The less attractive CEOs seem more focused on what they can accrue for themselves personally in the short time they have at the top. Clearly, there’s a world of difference between the two approaches.

3 questions for finding your goal

You don’t have to make your legacy objectives public (although you might). However, when you get clear on what your legacy is going to be, you’ll feel a new level of energy and enthusiasm for what you do.

When I think of all the leadership qualities that I admire and aspire to, humility tops my list. If you’re looking to really excel then don’t focus on recognition or personal reward; just focus on doing the work to the best of your ability.

In Legacy, one of the greatest examples of humility that is fostered in the All Blacks team is that everyone, including the most senior players, sweep out the sheds after training. It sends a powerful message to everyone that even the superstars do team-based tasks from time to time. Everyone contributes.

“Humility does not mean weakness, but its opposite. Leaders with mana understand the strength of humility. It allows them to connect with their deepest values and the wider world.”
James Kerr, Legacy

Know Where You Are Headed

Without the pull of a goal bigger than money, you can be forever chasing your tail and feeling unhappy with your progress.

Ryan Holiday, author of Ego is the Enemy, says

“People have strong opinions about what is good and bad, positive or negative in life. Yet if you ask most of them what they’re working towards, what their grand strategy for life actually is…most can’t answer.

This is a contradiction. If you don’t know what you’re trying to accomplish or what’s important to you, today or in life as a whole, you have no idea whether an event is truly good or bad.”

I think that just about sums it up for me.

Know where you are headed. Have a goal that’s bigger than money. Focus on the legacy you would like to leave when your time at the top is done. It’s a powerful way to find real meaning in the work that you do.

This article expands on Number 8 in the 26 Standards of Performance for Financial Planning Greatness document I created and shared recently.

If you’d like to receive more free tips to help grow your business then sign up to our weekly newsletter here:

“Everyone has a goal that’s bigger than money when they dig a little. Everyone.”

0 comments to " Success Secrets from the All Blacks "