Is Fear Making Your Decisions For You? - FP Advance

Is Fear Making Your Decisions For You? How to fight the fear of decision making.

Fear and procrastination are hurdles to be overcome when you’re trying to grow your business. The two are related. No one deliberately procrastinates but fear of the unknown can easily translate into lack of action.

The good news is that there are some simple steps you can take to overcome any fear that arises as you grow your business.

Honestly evaluate where you are currently. Things are rarely as good or as bad as they seem. If there are things you’d like to see improved, be honest about them (but don’t beat yourself up – that’s not helpful!).

Walk yourself down the path of ‘what’s the worst that can happen?’ I mean really go there.

For example, if you’re thinking of narrowing your target group of clients, a natural fear is will I find enough of these people and what will happen if I don’t? Ask yourself how bad could it get? 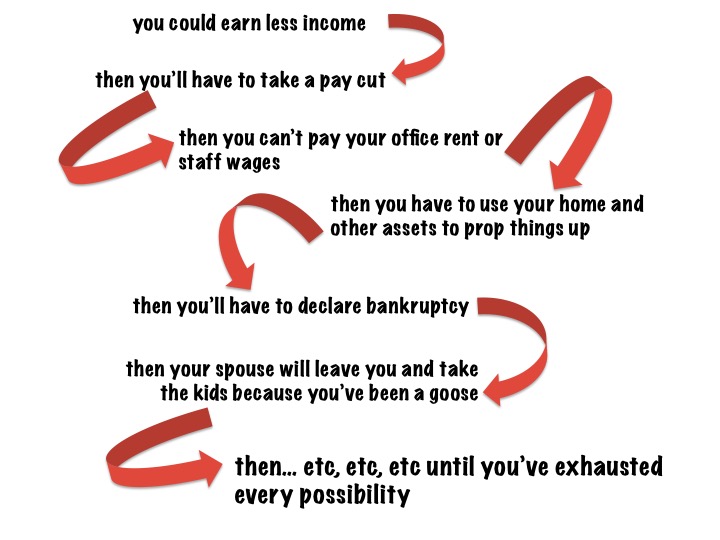 What you’ll find is that once you’ve explored the very worst case scenario, you’ll see how it will probably never come to that. You can also start to think of strategies around some difficulties you may face. But, if you don’t let yourself go there and give a voice to your fears, they can keep you paralysed.

Do it and see how liberating it can be.

If you feel overwhelmed with the size of the task (and this is easy when it’s a big project or problem), break it down into tiny, baby steps. Life coach Kerri Richardson recommends breaking it down into one initial task that will take less than 5 minutes to complete. Then take that step. In most cases, action conquers fear, so breaking things down this way makes them feel achievable.

How do you eat an elephant? One bite at a time.

In this recent article, Angie Herbers (a leading business consultant in the US), outlined some of the mistakes many advisory firm owners make. One of the mistakes she highlighted was “putting pressure on yourself” and tells the following story:

“A friend of mine is a fan of the former San Francisco 49ers Hall of Fame quarterback Joe Montana (who, in a career spanning 1979 to 1994, won 117 games, including four Super Bowls, and was named Super Bowl MVP three times), and likes to tell this story:

In an interview, Montana credited his success to the fact that he didn’t put pressure on himself. “Pressure is self-inflicted,” he said.

Many owner-advisors could take a page from Montana’s playbook. They try to do too much, too fast, often driving themselves (and the people around them) to high anxiety and exhaustion. Business owners need to learn to take things one day at a time, one task at a time, to create a realistic plan to get things done and to delegate as much as they can. They also need to set realistic goals. Success is achieved one small step at a time. Trying to take big leaps is just setting yourself up for failure. Instead, learn to use small successes to build a big one.”

I know in my own business I’ve sometimes felt under incredible pressure and created great stress for those around me with self-imposed deadlines. Stretch the deadline and the pressure comes off. It all still gets done.

I know this appears to fly in the face of the business advice you hear about ‘setting strict deadlines’ but my view is that life’s too short to be miserable. Cut yourself some slack!

Facing up to your fears can really dispel any hold they might be having over you and snap you out of the procrastination conundrum. You’ll also find that by openly admitting and discussing difficult issues and their potential downsides, the fear dissipates and a lot of the emotion gets taken out of the issue. This is a recipe for better quality decision making.

If you’re facing a difficult situation, take a look at these four steps and see if they can help you move through it.

Life’s too short to be stressed. Cut yourself some slack & ditch the self-imposed deadlines.

We’re running How To Create A Killer Review Service one day workshop in London on 2nd July 2015. As usual, our newsletter subscribers will know before anyone else and get first dibs on the early bird discounts!

It’s that time again, and we’re kicking off our second Uncover Your Business Potential Course in June. We’re also delighted to be moving on to Year 2 with our current advisers.

1 comment to " Is Fear Making Your Decisions For You? "